Suki is a Melbourne based street artist and filmmaker. She’s made the short movie ‘INDI KIDZ’ together with the street artist Be Free, and is currently working on a related mini-series.

Melbourne is a wonderful city to live and play in, art and creative culture are embraced in a way that is unique to other cities around the country and the world. I moved to Melbourne in 2009 and fell in love with exploring the ever changing and evolving art in the back streets of the inner city suburbs. I come from a creative family so I’ve always been a creator through art and traditional crafts but when I discovered printmaking- namely lino printing- which I had only ever briefly played with in primary school, I fell in love. I really love the process of printmaking and it seemed like the perfect way for me to contribute to the evolving canvas of the streets I loved so much.

You’ve mentioned you grew up surrounded by art. What type of art was it? How did your art evolve from this environment?

Both my parents are creative, I grew up surrounded by painting, music and textile crafts. Growing up in a small town my family was always ‘different’, we were vegetarian, grew our own vegetables and embraced a healthy alternative lifestyle long before it became commonplace. As a result I guess this always encouraged us to think outside the box and outside the norm of mainstream culture, so forging my own path through art was a natural expression of what it is to live wholeheartedly.

Many of your works are designed in simple, beautiful black lines. Is this simply a consequence of the lino cutting technique, or was it the other way around? Did you choose to work with lino because it fitted best your style?

I think my drawing and lino work evolved together.

You said somewhere your characters had some manga influence. When I see your drawings I think about the Japanese Edo period sometimes, but I also think there’s a lot more than that. I think your art feels really connected to nature, not in a landscaping sense but through exploring the purest, simplest meanings of what being a person is. Sure, it does feel like you may have had different influences in your art –everyone does, I guess–, but, to me, your work is mostly a really transparent expression of your inner self. If this is the case, I believe you’ve achieved one of the purest forms of art, and I think this is something very, very hard to do. How do you feel about your art? How much of it is technique, how much of it is just instinct?

Thank you! I definitely feel like I’m still a novice, I have so much to learn and so many ways to grow. I act very much on instinct. I see my work as a way to explore and embrace what it means for me to be a woman in this world. I didn’t always have the words to adequately explain how I felt about my own femininity so exploring my world through art has given me a way to examine who I am. Not so long ago I read a Frida Kahlo quote that really resonated with me, she stated “I am the person I know best” as her reason for painting self-portraits. Although my art is usually only very loosely based on myself I feel like it’s a way to communicate the way I experience the world.

I had dreadlocks for 12 years (I actually have only just cut them off) and while originally I got them because I hated having to do my hair and it was an excuse to be able to just throw up in a bun and forget about. But, over the years as they grew I began to see the life that was tangled into them. Memories and pivotal life experiences like giving birth, raising children, and exploring the world have woven themselves into my hair and I carried them around as visual reminders to all the lessons and understandings I have gathered on my path through life. So, my hair became a life of its own with a collection of stories to tell and that reflects itself in the visual stories my art tells. 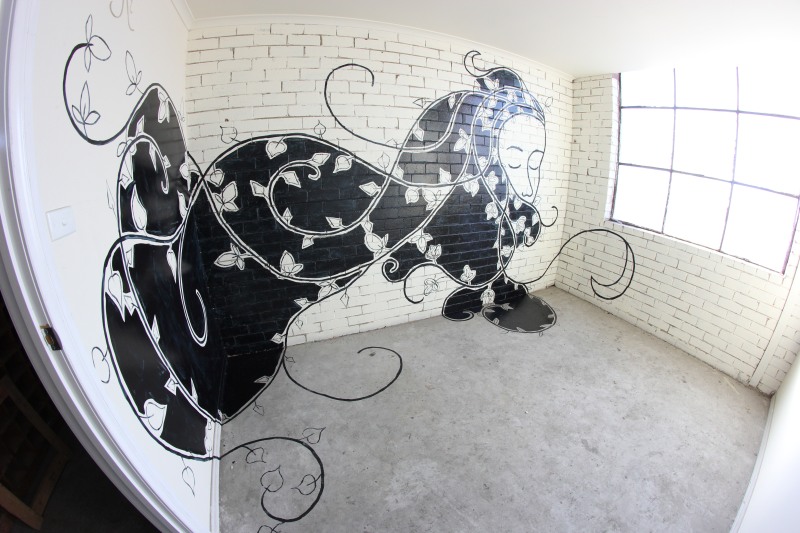 You’ve worked together with Be Free many times, not just in Melbourne but also in Madrid and other places, and I really think you two are one of the best match-ups in contemporary street art. I find especially interesting a combination of one of your characters and one of Be Free’s, where a woman is spilling colourful liquid on her head while a kid under her knees is covering herself with an umbrella. The way your different styles combine feels really, really natural and harmonious. Does this require a lot of planning? How do you decide the idea, the structure and the final shape of your combined works?

Be Free and I have spent a lot of time in each other’s company so ideas often just flow naturally without too much planning. I think we can both see how our separate existing imagery can work together naturally in a collaborative piece so it comes together pretty easily. Planning for bigger projects is usually just a series of conversations about what we want to do versus what is actually physically possible- I’m usually more rational in adhering to restraints. We plan around a collaborative aspect like a string installation and then discuss imagery that is complementary that we can go and do separately. It’s all pretty organic and casual most of the time.

You’ve also made a short film together, INDI KIDZ, and I think this is an extraordinary idea. It’s really amazing to watch your art moving and speaking on the screen, and I think it gives it a new dimension in a sense. How did this project start, and what challenges did you find in the process of creating and developing INDI KIDZ?

Be Free has made a lot of little films over the years that document the process of bringing an artwork to the street. I’ve dabbled in it but Be Free has definitely embraced the story telling aspect of their art. So this project was a slow evolution from the stories of works on the street where the character could come to life on the screen rather than just in the art itself. Time management was one of the hardest aspects, Be Free has no sense of how long things actually take and as a result is overly ambitious with deadlines (which isn’t necessarily a bad thing). The editing process took a year, Be Free was working singlehandedly on editing the footage and applying the unique colour pallet frame by frame. It was a huge task but so worth it. Another challenge was that neither of us had directed a film before and we were working with equipment we didn’t know enough about and children who had never acted before. The kids were great and I’m thankful for how patient they were when we fumbled our way through what is actually quite complicated for a short film.

I believe you will also be filming a new mini-series this year. How’s this project going? Will it be related to INDY KIDZ?

The mini-series is still in the writing stage. I convinced Be Free that we needed to have the short film finished before embarking on the next project. We’ve both also had other art and personal projects on the side during the whole process which makes planning the next film project take a little longer. The mini-series will be based around the same characters as in the short film, I’m looking forward to developing their characters a little more.

Would you like to keep working on cinema as well as on the streets? What are your future projects as an artist?

I really like film as another form of expression so I’m definitely keen to explore that direction more. I just finished building a little studio, with some help, in my backyard from pallets and secondhand doors and windows. At the moment I’m really enjoying getting some work done in the new space and what I’m really focusing on is exploring and seeing where it takes me before I make any other big plans. But of course I want to share my art with the streets and the world so I’ll always make some space for paste up missions.